The making of your meal on an Emirates Airline flight, www.thenational.ae

In 1919, the first airline meal was served by Handley Page Transport on a flight from London to Paris. Passengers were served a pre-packed lunch box that cost 3 shillings (about Dh35 today, on a retail price index basis).

In 1919, the first airline meal was served by Handley Page Transport on a flight from London to Paris. Passengers were served a pre-packed lunch box that cost 3 shillings (about Dh35 today, on a retail price index basis).

The US$144 million facility handles about 375 flights a day. In a year, it supplies 40 million meals for Emirates flights and 8 million for other airlines.

The facility, which works by the clock like a factory, runs from the wash-ware area, where most of the used in-flight equipment is offloaded and separated. Some 2.5 million items of dirty equipment are split into food and beverage equipment and duty free trolleys and it is cleaned by 500 workers.

“Workers load everything into a hangar on one side. This is then taken to the ware-wash machines on another side for hygiene reasons,” he adds.

While the dishes, glassware, and cutlery are cleaned and separated, a 2.5km monorail brings the cleaned items to the food area on the first floor – where restaurant-style food is produced on an industrial scale.

The contents of an airline meal vary from one carrier to another. It also differs from one class of ticket to another. Generally, meals on first and business classes are served in multiple courses with tablecloth, metal cutlery and glassware. A typical airline dinner will include a choice between chicken, fish or beef, a salad or vegetables, bread and dessert.

Mr Davis says all the food that is supplied from the facility is delivered at below 10°C. “It is not hygienic to load it warm. The food is heated on the aircraft.”

According to hygienic standards, hot food should be consumed a maximum of 72 hours after it has been cooked. For cold food, it is 48 hours from preparation to consumption.

“Generally, we are preparing food eight to10 hours before a flight,” says James Griffith, the assistant vice president at Emirates Flight Catering.

At the facility, about 520 chefs from around the world produce thousands of meals every day. These are for Emirates and another 125 carriers that operate through Dubai International Airport.

“Our menus are changed monthly,” says Mr Griffith. “We have different menus for different regions of the world and each region is broken to sub-regions.” The facility has different kitchens for different cuisines such as Arabic, western and Asian, including a Japanese kitchen that offers sushi and miso soup. Desserts are also cooked in-house, he adds.

To serve food garnished to restaurant-like perfection, a sample dish is duplicated by the workers at the facility. A screen hanging on a wall also shows a countdown to the times of flights. The flight information turns orange five hours before a flight then it turns red three hours before a flight, as a signal to hurry along.

“Looking at the screen when it’s red, it shows that it is going to be a bad day,” says Mr Griffith with laugh.

In recent years, airlines have started offering specialised and religious meals for passengers. Gluten-free, low-calorie and diabetic meals are becoming more common. But even in the vegetarian sphere alone, meals are divided into western and Indian cuisines.

“When people are making their booking or 24 hours before a flight, passengers let us know if they are diabetic or eat special food for religious reasons,” says Mr Griffith.

“On board, there are always meals for vegetarians or low-calorie meals.”

Emirates declines to disclose the average price per meal or how much food contributes to its overall expenses. However, according to Oliver Wyman’s research, food for business class makes up less than 2 per cent of an airline’s total costs.

Outside the Emirates facility, there are numerous cranes at work as an extension is being built to cater to the rapid expansion of Emirates Airline. That means catering lorries can now take up to 30 minutes to reach the aircraft at Dubai International.

If the carrier is to move to Dubai’s new airport, Al Maktoum, a new facility will definitely be needed.

At 35,000 feet, food and drink taste as they might if the diner had a cold, a study by the Germany-based Fraunhofer Institute shows. At high altitude in a pressurised environment, salt tastes 20 to 30 per cent less intense and sugar is reduced by 15 to 20 per cent. In addition, the decrease in humidity in an aircraft dries the nose and affects the olfactory sensors necessary to fully taste the ingredients of a dish.

This makes mild dishes such as fish and poultry require additional salt and herbs. On the other hand, Asian dishes, which are richer in flavour, remain tasty on high altitude.

For safety reasons, open-flame grills and ovens are not allowed in commercial aircraft. This leaves cabin-crew only open with the option of blowing hot, dry air to warm meals that were previously cooked on ground.

“When you get in the airplane the air is so dry, so it starts to dry-out your nostrils,” says James Griffith, the assistant vice president at Emirates Flight Catering.

“Funnily enough, everyone says that ice-cream doesn’t change – up or down,” he adds. 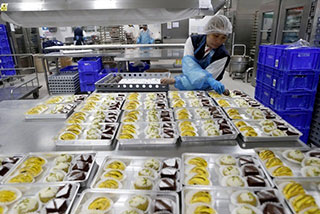 The Emirates Airlines catering facility located in the Cargo Village that serves Emirates flights along with other airlines flying out of the Dubai Airport. Dessert trays are sorted and packed. Antonie Robertson / The National